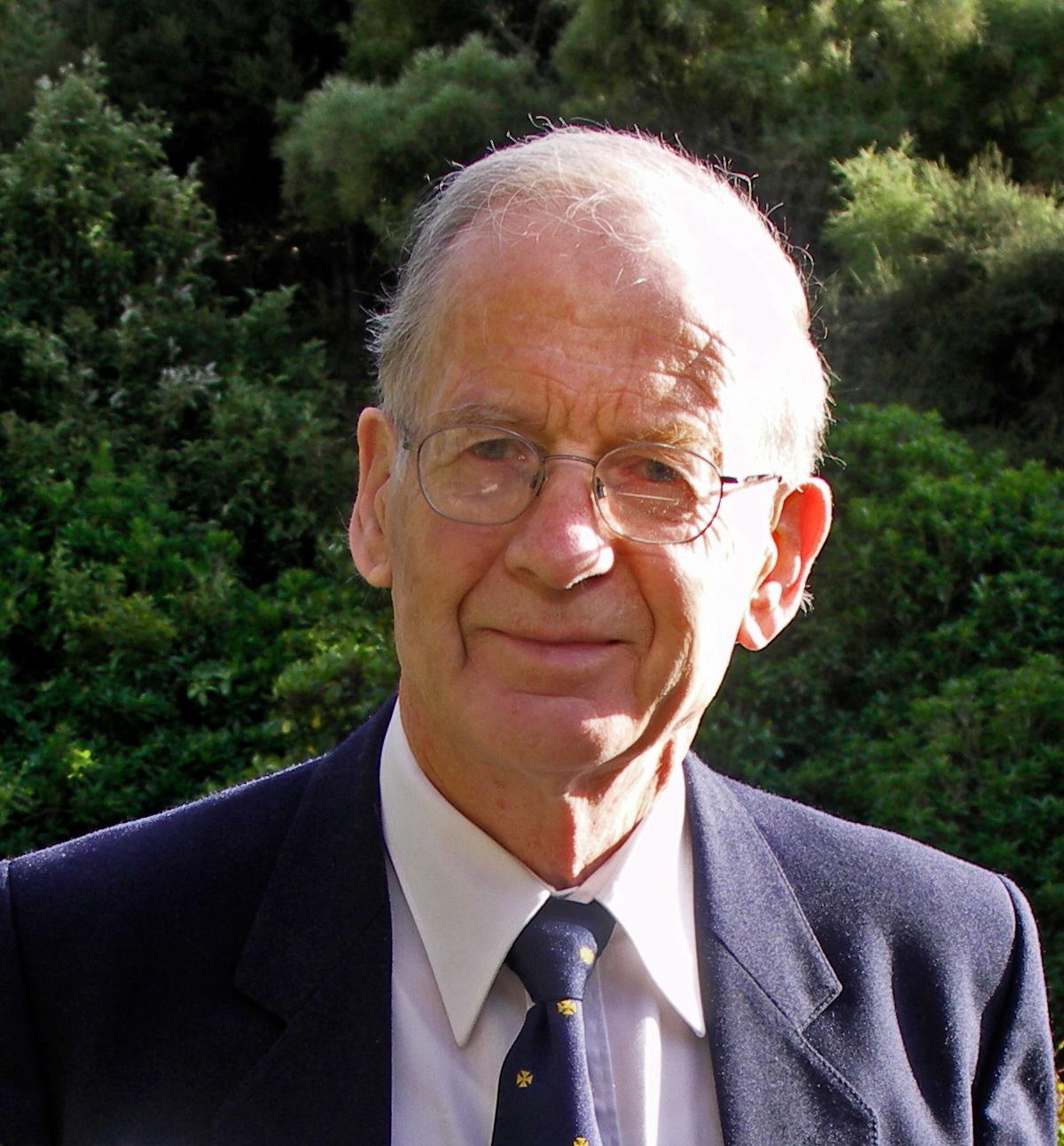 Dick Tripp is an Anglican Clergyman with experience in parish ministry in the Diocese of Christchurch, New Zealand, and was previously a business partner in a family farm, which is now run by his son. He has an MA in Theology from Cambridge University. He has had several years experience in training people to share their faith, using the programme developed by Evangelism Explosion Ministries. He likes chopping wood and enjoys his family.

I was born at a very early age, very sensibly on a mid afternoon, on our family farm in the south of New Zealand in 1932. I owe much to my parents. Dad was not only a very good farmer, but during World War II he led a small, but very effective group of men, the First Commando Fiji Guerillas on patrol work behind enemy lines in the Soloman Islands to provide the Americans with information on enemy movements. They awarded him the Silver Star, one of their highest awards, for this valuable work. Mother was awarded the Queen’s Service Medal for her charitable work in the local farming community.

Though nominally Anglicans, they never taught me the basics of the Christian faith and I never attended Sunday School or Bible Class, so when I eventually became a Christian about the age of seventeen I doubt if I could have quoted one verse from the Bible and certainly had no knowledge of what being a Christian was all about.

When at boarding school, one Sunday evening we had a visit from a visiting speaker who had been brought out from England by a Christian group working in the schools. He spoke to a gathering of us in the padre’s study. I don’t remember details, but knowing something about him (I looked him up some years later when in England) it would have been along the lines of who Jesus was, what he had done for us and how we could invite him into our lives and be reconciled to God. Anyway, what he said made sense to me so when he invited us to pray and make a commitment of our lives to Jesus, that’s what I did. At that point I couldn’t have explained it to anyone, but I knew that night that something great had happened. It was a wonderful sense of being loved and was very aware of God’s presence and that I had found a relationship with him.. That is an awareness that has never left me over sixty years. For some people, Christian conversion and the awareness of the new relationship with God is a slow process like the dawning of a new day. I can remember the moment it happened, though I don’t know the date.

Some months later, when hearing the English cricketer David Shepherd speak about cricket and his Christian faith in the school assembly hall, it dawned on me that what I had experienced was made possible by the death of Jesus, the Second Person of the divine trinity, for the sins of the world, including mine.

I was privileged to be able to attend Cambridge University, where my father and grandfather had been before me, where first I studied agriculture. After three weeks I realised I was more interested in working with people than animals and so changed to medicine. That only lasted a year as I became aware that God was calling me to some kind of Christian ministry and so changed again to theology. I eventually became an Anglican minister in Christchurch Diocese, New Zealand.

What I valued most of the three years in England, was the influence on my life of being able to attend Christian conferences, take part in some children’s beach missions and some student led missions, and in particular the Billy Graham Crusade when Billy preached seven times a week for three months in Harringay Arena in London to crowds of 13,000.

There were two individuals to whom I owe a great deal. One was a fellow student, who befriended me from the time I first arrived in Cambridge and who was a wonderful role model of Christian commitment. The other was the Anglican minister, John Stott, one of the most influential Christians of the last generation, whose sermons, books and personal advice laid a great foundation for my understanding of the Bible, which was later was to provide a solid grounding for my own writing. Another who had an impact on my life was Dawson Trotman, founder of the Christian organisation, the Navigators, and who was responsible for organising the follow-up of all the converts of the Billy Graham Crusade. He inspired me to start a regular programme of memorising key passages of the Bible.

My years in Anglican parishes have not been easy. About 10 or more years ago I was diagnosed as having aspergers syndrome, a genetic disorder in the autism spectrum that can have many different symptoms. A common factor in those affected is a lack of social skills, to at least some degree, though aspergers people are often very gifted in one specific area. Finding this out was great for me as it explained so much about my past. My best work had always been with individuals, rather than groups, which was some disadvantage when pastoring a church, when one is expected to be able to do everything to run a parish. However, my aspergers was a very positive influence when, on retirement from parish ministry, I began writing booklets. Due to my logical way of expressing things on paper my booklets proved easy for those with English as a second language to read and also my aspergers enabled me to focus and persevere in the task.

Looking back over my life it seems clear the God has been preparing me all along for this ministry which has take a considerable amount of my time over the past 20 years since retirement from parish ministry. Needless to say, I owe a great deal to my lovely wife Sally who has many gifts that I don’t and who has shared my joys and difficulties over 50 years. Without her I would not have been able to do much that I have.

There have been a number of things that have resulted from my Christian faith that have meant much to me over the years. One is the sense of forgiveness and complete acceptance into God’s forever family that has nothing to do with being “good enough”. We all have many regrets of faults and failings, but acceptance with God only depends on acknowledging our moral failures and accepting the forgiveness that is given freely though the cross, and loving him in return. Another is the knowledge that whatever life throws at me, and we all have to face difficult circumstance at time, I will not have to face them alone. It is wonderful to have a relationship with a God, who is love (1 John 4:8), who chose suffering as a means of redeeming his creation. He knows all about suffering and is able to bring good out of the worst of situations. Another is having someone to thank whenever good things happen, however trivial they may seem. Another is the knowledge that if we genuinely seek to do God’s will, he will guide us in the paths that will enable us to make the best use of those gifts he has given us for the building of his kingdom, maybe in paths we had never dreamed of.

Finally there is the sense of security of knowing that one’s eternal future is well taken care of. I am 83 and have no knowledge of how much longer the Lord will give me on this earth, though I make a point of keeping fit with a good diet and regular exercise. My desire is to make the most of what time I have left. The process of death, when it comes, may be a painful experience. However, death itself is a non-issue. I have been writing this article on Easter Day, 2016, when we celebrate the resurrection of Jesus, which, together with his birth and death, are the three most important events in human history. Jesus’ resurrection is the receipt on the full payment for my sins that he made on Calvary. God, my Father, owns the land on both sides of the river Jordan and I look forward to a glorious future in his restored creation with the rest of his eternal family. Altogether my life has been good and the Lord has blessed us with three fine Christian sons and their families. My final word would be the statement of Jacob when blessing his sons towards the end of his life. He spoke of “the God who has been my shepherd all my life to this day” (Genesis 48:15).

WHAT OTHERS SAY ABOUT THE AUTHOR

“Dick Tripp says enough to show that Christian faith rests on solid historical and textual data and that whose who dismiss the Bible in cavalier fashion are either sadly misinformed or unwilling to face the facts. – Dr. Christopher D. Marshall BA(Hons), BD, MA, PhD Head of the Department of New Testament Studies Bible College of New Zealand.”

“I’m delighted that Dick Tripp has undertaken the task of writing this series of booklets on different aspects of the Christian faith. He has a heart for evangelism and a burning desire to share his faith with others. – Reverend Dr. David Coles, MA, BD, MTh, DipREd, PhD Bishop of Christchurch, New Zealand.”